It is notoriously difficult for digital art to survive online, thanks to updates that leave old interfaces outmoded, misunderstandings about appropriation and copyright, and various forms of censorship. Vimeo, a video-sharing service that has been popular with independent filmmakers and artists, has long been considered something of a safe haven—but, after her work was deleted from the website, one feminist artist has alleged that Vimeo may not be as open-minded as it claims to be.

Last week, Ann Hirsch took to Twitter to call out Vimeo for deleting her channel. In an email reviewed by ARTnews, Vimeo informed her that her videos, amounting to more than 50 uploaded to the site over the past decade or so, were deleted because they contained content that might provide “sexual stimulation”—which the service says can include images and sequences that may not seem explicitly sexual, such as those evoking fetish cultures. 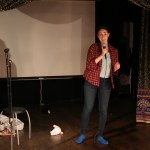 “They’ve been supportive of my art for so many years, but this is new,” Hirsch told ARTnews. Since she has maintained her account, she said, Vimeo has flagged her art before and asked her to password-protect some of her more explicit video works, which have focused on representations of women and sexuality in the digital sphere.

Vimeo did not respond to a request for comment submitted through a contact form on its website. As for possible recourse, the email sent from Vimeo to Hirsch read, “We are unable to restore accounts that have been terminated for this kind of violation.” On a page at the site for “frequently asked questions,” Vimeo says it “does not allow videos that contain explicit depictions of nudity or sexual acts (in most cases), nor do we allow videos that seem primarily focused on sexual stimulation. (There are plenty of other websites for that.)” It does, however, permit users to post “non-sexual nudity, including naturalistic and documentary depictions of human bodies.”

Asked which works might have caused Vimeo to delete her channel, Hirsch brought up Girl Peeing, a video in which Hirsch poured apple juice on snow and had a friend eat it. “I guess it gets a lot of views because of its title,” Hirsch said. “It’s a joke.”

Hirsch’s work has been considered in important surveys of digital art, including “Electronic Superhighway (2016–1966),” a major exhibition of art and the internet over a 50-year period at the Whitechapel Gallery in London in 2016, and Rhizome’s Net Art Anthology, which archives and contextualizes key digital works (and appeared on an ARTnews list of the exhibitions that defined the 2010s). Hirsch first became known to many for a 2008–09 YouTube performance called Scandalishious, in which she created videos of herself inhabiting a “hipster college freshman” archetype. Rhizome has called it “an early example of a truly social media–based artwork.”

In the past, Hirsch has addressed ways that female artists’ work is frequently censored, and she said she considers her Vimeo account being deleted another example of this. “For everyone talking about feminism and #MeToo and the rediscovery of women artists, it’s frustrating,” she said. “They’re also forgetting about the people making work now and their voices are being lost. It’s happening now to me and so many other women.”

All the rave, Kittin returns to stages in Sydney and Melbourne

SculptorCentral - November 7, 2019
0
Relocating to a village has been liberating, “living in wellies, no make-up, no fancy clothes,” she says. “You peel off a lot of...

George Condo on How a Brush With Death Enlivened His Latest...

SculptorCentral - November 23, 2019
0
When Sunday Life catches up with Joanne on the set of the show, it’s the second-last day of a gruelling four-month schedule. Before...
Thanks for subscribing! Please check your email for further instructions.