On Sunday, tourists flocked to the Walled Off Hotel, a guesthouse designed by Banksy, to see the artist’s latest creation: The Scar of Bethlehem, a Nativity scene with what appeared to be a bullet hole looming over a quaint Biblical tableau.

The work features Mary and Joseph kneeling beside the baby Jesus beneath a towering concrete wall—an allusion to Israel’s West Bank separation barrier. A gaping bullet hole shaped like a star hovers above the family. Graffitied on the wall are the words “love” and “peace,” in both English and French. The elusive street artist announced the new work Saturday in an Instagram post, calling it a “modified Nativity scene.” 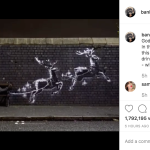 “Banksy is trying to remind the world that people of Bethlehem, where Christmas was started, are not celebrating Christmas like the rest of the world,” Wisam Salsaa, the hotel manager, told the Associated Press.

The Walled Off Hotel has been a popular draw since its opening in 2017. The nine-room hotel decorated with works by Banksy operates as a gallery, museum, bookstore, and spray-paint shop. Nearly every window overlooks the 30-foot-high concrete and fence barrier erected by in the early 2000s by Israeli officials, who said it was built for security reasons.

Palestinians have alleged that the wall has unfairly brought parts of their country’s territory under Israeli occupation. In 2004, the International Court of Justice at the Hague in the Netherlands ruled that the barrier is illegal.

Banksy has been an outspoken critic of the political situation in the West Bank. Four well-known works of the artists have appeared in Bethlehem, including Girl and a Soldier and The Armored Dove, which depicts a bird fitted with a Kevlar vest and holding in its beak an olive branch. In 2015, the artist posted images of murals that he claimed to have created in the Gaza Strip, in addition to two-minute documentary about alleged human rights abuses in Palestine.

Build Your Own Kinetic Engines With These Mechanical Kits by Morris...

A Beloved San Diego Gallery Is Pushed Out by a Wave...

SculptorCentral - January 25, 2020
0
Thanks for subscribing! Please check your email for further instructions.