Beyond certain market matters, it’s long been taboo to talk about money in the art world. But Los Angeles–based artist Carmen Argote prefers to keep her financial struggles public—in the interest of acknowledging the difficulty of maintaining a career while allowing “a certain kind of openness to take things in and trust in the looking,” the 38-year-old artist said. Openness of the sort is as much a part of her practice as her sculptural installations, which are now on view in a solo show at the New Museum in New York (through January 5).

In 2018, Argote brought attention to her dire financial state in a bracing way with the title she gave a solo show at L.A.’s Commonwealth & Council gallery: “The Artist, having used all her money to make the work, lives in the mother-mold of her sculpture.” The exhibition was on view at the same time as that year’s edition of the Made in L.A. biennial at the Hammer Museum, for which Argote had been commissioned to create a new piece: Filtration System for a Process Based Practice, a circular dome made of fiberglass that was covered with fabric and, later, dripped with paint. But the Filtration work she showed at the Hammer came with a cost—it drained her resources, both financially and artistically. 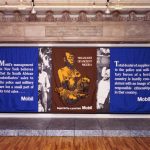 “That show was pointing to the economics of the making of an artwork for a biennial like that,” Argote said. “It’s inherent in the title. It asks the question: How does an artist navigate their practice when all of your resources go into one object? How do you keep making work?”

Argote’s artworks are deeply connected to the circumstances of their making. After the original Filtration work was shipped off to be shown in Made in L.A., she realized that the weight of the fiberglass structure had left a physical imprint in her studio. Around the same time, the fabricator who had created the fiberglass sent back the work’s mother-mold—a wooden wedge that had been used to cast the sculpture.

Time was ticking on her Commonwealth & Council show, and not able to create another version of the Filtration piece in full, she opted instead to use what she had on hand: leftover materials and scraps from previous works. She created casts in papier-mâché and thermoplastic onto which she drew schematics representing how she created Filtration. Strips from the board she had draped over her floor to capture dripping paint were affixed to the wall like scrolls, and in a last act, she affixed black-and-white pictures of her cat to the mold.

The resulting work—titled Mothermold—and the entire gallery exhibition became a commentary on what happens when something created for a biennial becomes an artist’s defining work—and the many ways an artist could refer to seemingly invisible realities and make them visible instead. Though she now has what she calls a residency-based practice (in 2019, she participated in one residency in Istanbul and two in Guadalajara, Mexico), the difficulties she has faced throughout her career—surviving on a shoestring budget, toting tough-to-make process-based works around the world—are always present.

“It all comes into play,” she said. “What does hiding it, never talking about it, or pretending it doesn’t exist do?”

The New Museum show—titled “As Above, So Below” and curated by Margot Norton—picks up that thread and focuses on the relationship between a city, its history, and its people through nine works, all with a special connection to the city in which they were made. In the ground-floor gallery space visible from the street, Argote framed a large window with blue and red LED lights meant to evoke the bodegas she saw when she was doing a residency in East Harlem. The largest work is a floor piece that includes around 50 pieces of dyed fabric sandwiched between wooden tortilla presses, each weighed down with volcanic rock. Presenting works on the floor, Norton said, “relates to issues of institutional structure, ideas of high versus low, and even class-related and culturally specific related ideas of what is art.” To that effect, Argote said she likes “flipping the logic” of exhibition norms.

Even the vertically hung works were created while laid out on the floor—intimately related to Argote’s body as she sat on top of canvas—in a rectangle still present in the final work—and painted swirls and blobs that became ethereal abstractions. The uneven texture in these pieces comes from natural materials, such as dyes made from avocado, cochineal, and guayaba leaf are covered with a layer of iron and cut with lemon.

Argote began working in such a way in preparation for a 2018 exhibition at Instituto de Visión gallery in Bogotá, Colombia. The idea, she said, “came from looking at people who were selling things on the street and how they would place all the items they were selling in relationship to their body—and also the viewer. It got me thinking about compositional conventions in Western painting and how these were also compositions but weren’t visible as compositions.”

During her time in Colombia, the artist also took interest in the economics of avocados. At the time, various different native varieties were being cut down and replaced with the more marketable Haas variety to be sold in the United States. Argote’s work, as Norton put it, offers a way to think “about all the histories that are embedded in those materials.”

When Argote arrived in Guadalajara for two simultaneous residencies over the summer, she noticed that both locations (one of them the final home and studio of muralist José Clemente Orozco) had guayaba trees in their courtyards. She then added those to her arsenal to create canvases on which the ghost of her body—the blank square—looms large. “The kind of work that she makes has all these pathways where it slows down the viewer,” Norton said. “The performative quality—how she carves out space in her composition and the process—is very much embedded in the finished project. It’s not just an image that can be easily Instagrammed—it’s something that is felt.”

Argote is best-known for a work produced 10 years ago: 720 Sq. Ft.: Household Mutation–Part B (2010), which hung from the ceiling of the Los Angeles County Museum of Art in 2017 as part of the traveling exhibition “Home—So Different, So Appealing.” For the work, Argote excised the carpet from her childhood home and left it as she found it—stains, smudges, and all. That piece was just a starting point, however, and Argote has spent the last decade searching for new ways to create “lived histories.” “I started asking myself, ‘How do I work with material when the history isn’t there, when the connections aren’t there?’” she said.

The search for answers often begins with a long walk surveying the city around her, picking up details that may not have immediately been apparent before. “It sounds funny to say, ‘I was doing a lot of walking,’” Argote said. “But for me, it comes from trying to find these moments of freedom outside of structure.”

She brought up a recent stroll she took around Istanbul, where she did a residency last year. As she was walking through the city, she noticed vendors who would pick up discarded objects and add them to their carts with the intention of selling them. Intrigued by what she witnessed, Argote purchased a cart from a vendor that later became the basis of a show there, organized by Ballon Rogue, for which she created works on paper while seated on the cart. One side of the paper is covered in birdseed, which she saw a lot of during her walks.

“I try to see things in my environment that aren’t as visible to bring them forward and reveal them,” she said, explaining the affinities between her process and that of the vendors. “Being able to point to these things and finding some way to communicate what the value that I see in it is makes it into something more.”

It is a privilege to take a walk in the middle of the day, Argote said, wondering if having earned the chance to do so might be a measure of success. She thought back to a diagram she saw as a child that showed how much money she could expect to make if she went to college or not.

“It was this whole construction of what upward mobility looks like, tied to education,” she said. “I want to question that. Is the goal of higher education to have more money? What about the walk in the park?”

A New Book Chronicles the 125-Year History of the Button, Its...

SculptorCentral - December 2, 2019
0
Burglars broke into Berlin’s Stasi Museum under cover of darkness on Saturday night. They escaped with historic artifacts, including jewelry seized by the...
Thanks for subscribing! Please check your email for further instructions.