We’ve covered Chicago’s PITR and his ambitious street work in the past, and his latest endeavor ups the ante again. We have high expectations for this artist, especially after the magnificent “Paper Portraits” in 2016 and incredible 9 month collaborative project “Good Example” in 2017. 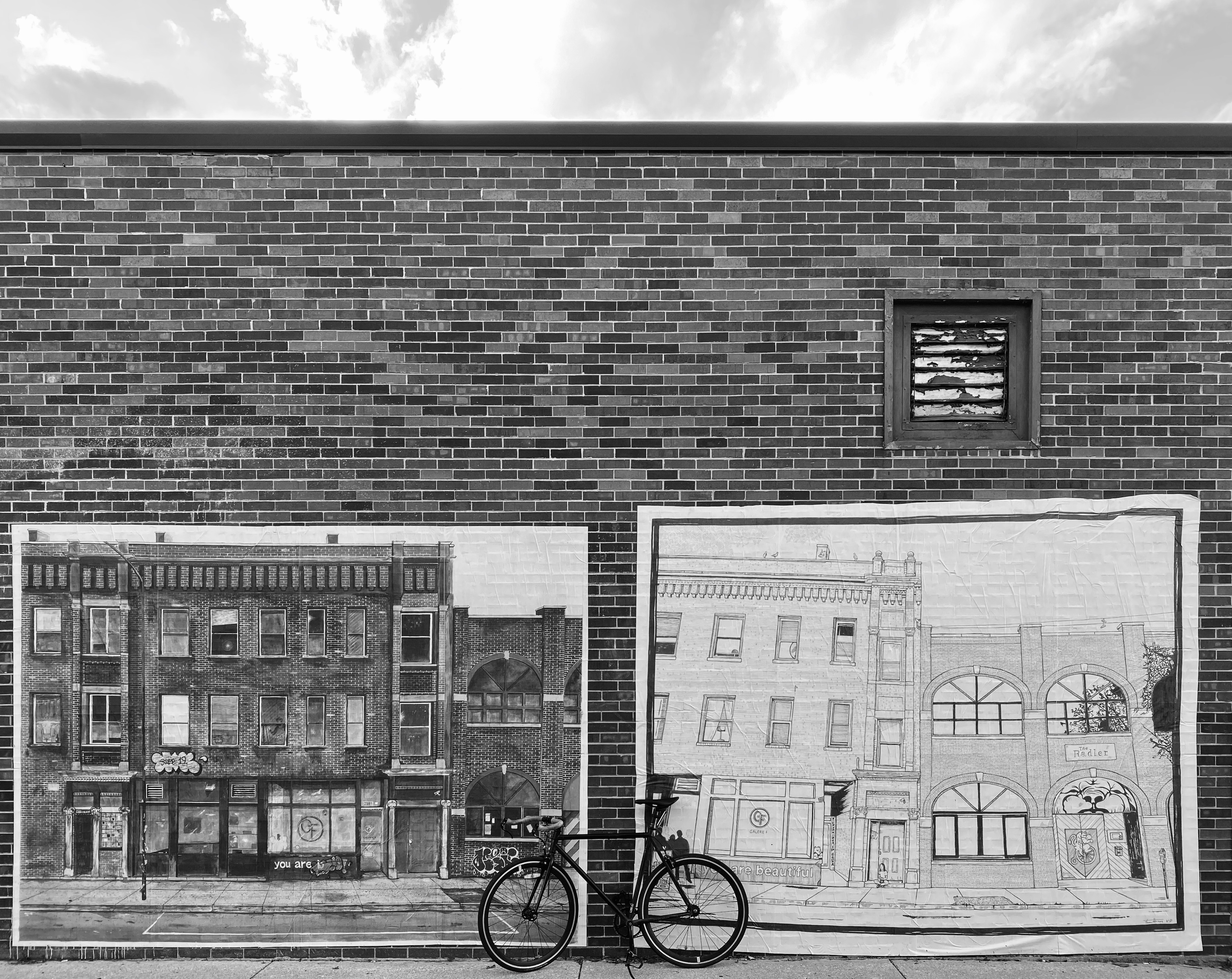 Originally launched in October 2018 and ending this month (13 months later!), the ‘Landscapes’ initiative reintroduces and reinvigorates familiar and foreign buildings, urban cityscapes and natural settings. “I asked each artist to select one landscape/place, facade or natural/urban image that has had a lasting impact on them,” said Pizza In The Rain, who handpicked all of the participants. “Once the artist decided on a landscape or place to feature, the two of us painted our separate interpretations of said place.” 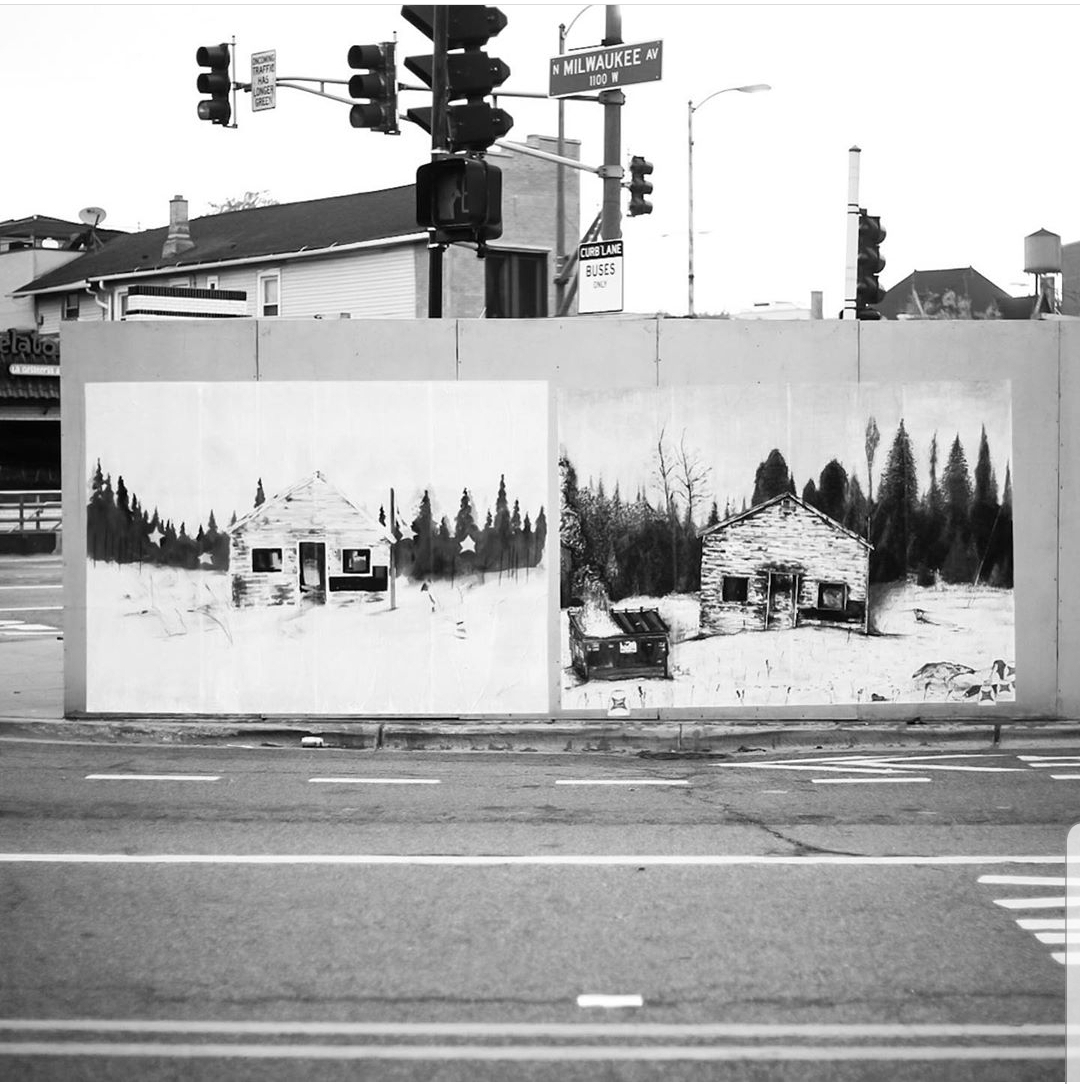 Each month, Pizza In The Rain and his chosen collaborator showcased their work throughout the streets of Chicago. “All installations were unsanctioned, but done in a non-malicious fashion,” PITR noted. “I kept all the original paintings myself, and the contributing artists painted, copied and enlarged them in black and white and, finally, wheat-pasted the copies on the street. This way, once the project concluded, I could display the original paintings at Vertical Gallery, alongside a series of photos showcasing the installation of these paintings on the street. It was the most original way I could come up with to allow collectors to actually own a piece of a public art project.”

When asked how he chose specific street locations for the project PITR tells us, “I decided what walls to put work on based on a few factors. First, they had to be on high traffic streets for visibility. Second, they had to be in a spot or on a building I either knew wouldn’t call the city to have them buffed immediately or an abandoned building. Finally, I chose walls where two large images worked harmoniously with both the wall itself and the surrounding environment. Some pieces were site specific, in that I saw a wall that looked perfect and catered the size/dimensions of the paintings to fit said wall.” 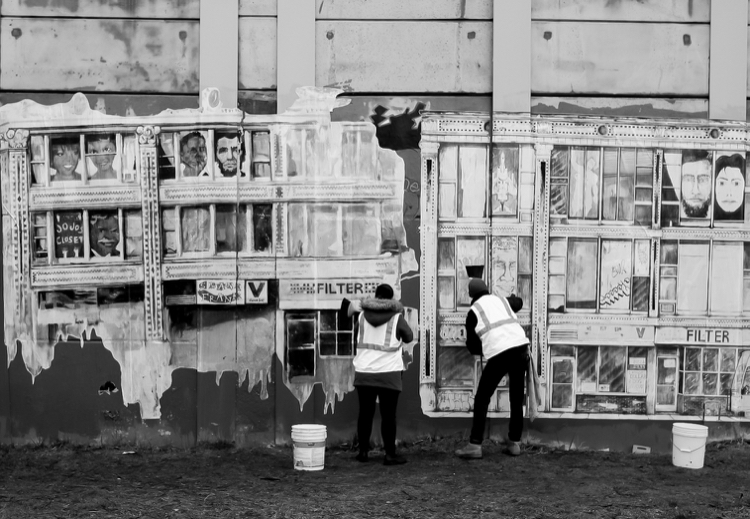 ‘Landscapes’ heralds the latest collaborative public art effort organized by Pizza In The Rain, who has long drawn inspiration from creating and displaying work in non-traditional environments. The self-taught artist cut his teeth on graffiti but abandoned tagging in his mid-teens; as he grew older, he rededicated himself to drawing, painting and public art, absorbing influences including Banksy, Cleon Peterson and Borondo.

PITR continues to work almost exclusively in public spaces, with an emphasis on creating art that harmoniously interacts with its surrounding environs. In 2016, he organized ‘Paper Portraits,’ a collaborative project similar in scope to ‘Landscapes’ that brought together 10 local and international artists to create street art inspired by PITR’s mother, a freelance photographer who shot primarily in black and white for 35 years. He followed that up in 2017 with ‘Good Example,’ another collaborative public art effort, this time celebrating individuals and events whose actions positively shaped society’s future. PITR’s own figurative work has additionally adorned walls in Miami, New Orleans, Portland, New York, Los Angeles, Paris and London. “What Pizza In The Rain is doing is very different than what anyone else is doing. He’s telling a year-long story, and turning the streets into a true exhibition space,” said Vertical Gallery founder and owner Patrick Hull. “Because they’re wheat-paste, these pieces can last as little as a day. Others have lasted two years. You just don’t know. It’s a true street art experience.”

The Vertical exhibit and accompanying book preserve ‘Landscapes’ for posterity. “It has always been my intention to wrap up one of these projects with an exhibition, providing context and a proper conclusion to a year’s worth of painting, planning and work,” Pizza In The Rain said. “These collaborative endeavors have introduced me to so many talented painters in Chicago and abroad. My hope is that I can continue to shine a light, if only for a moment, on these expert creators and allow them to connect with our city.” 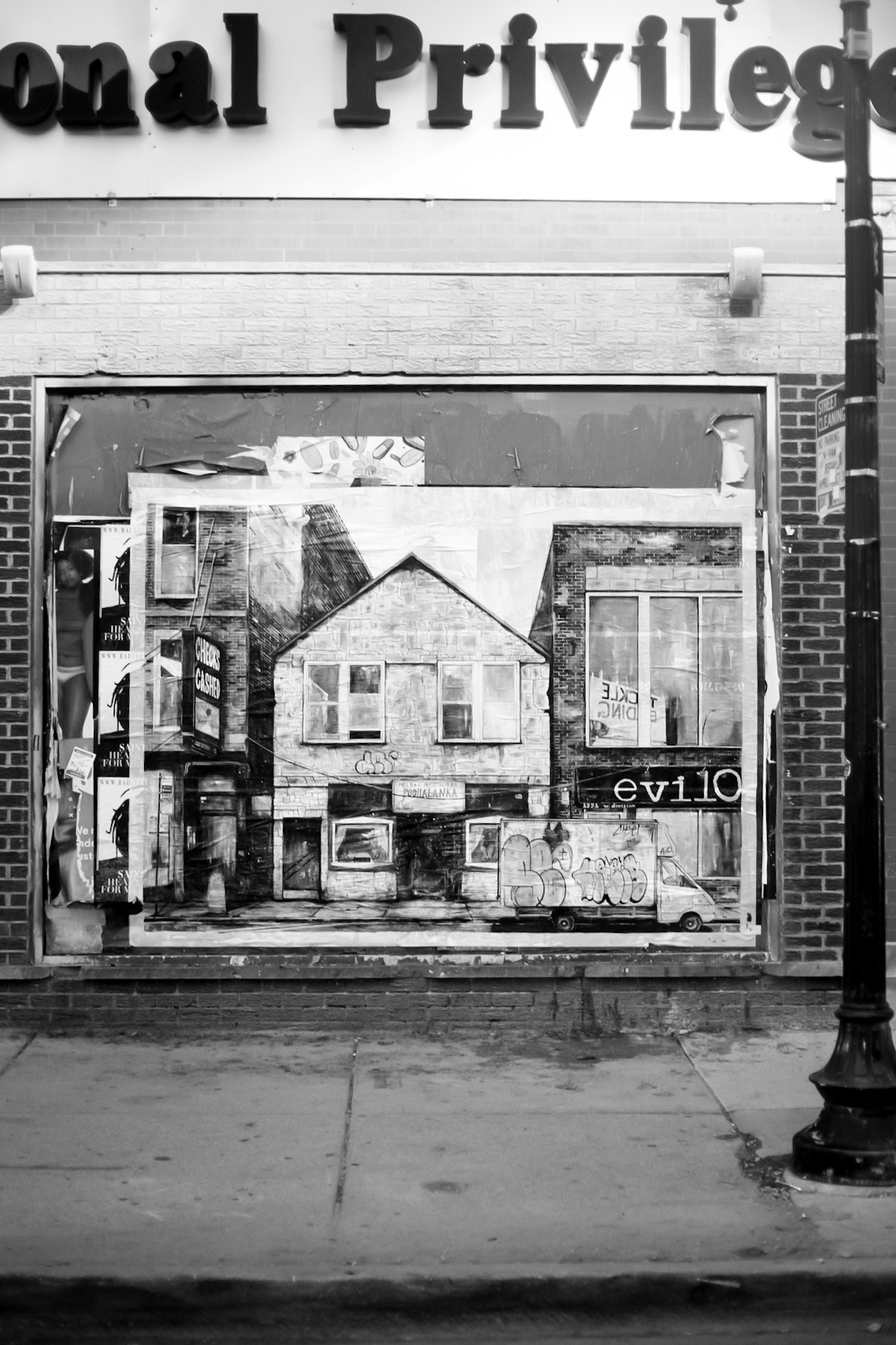 “Landscapes” is the artist’s second solo show in Chicago, and first since 2015. The opening reception will be this Saturday November 23rd at 6pm, and the exhibition will run thru Dec 28th. Vertical Gallery is located at 1016 N. Western Ave in Chicago 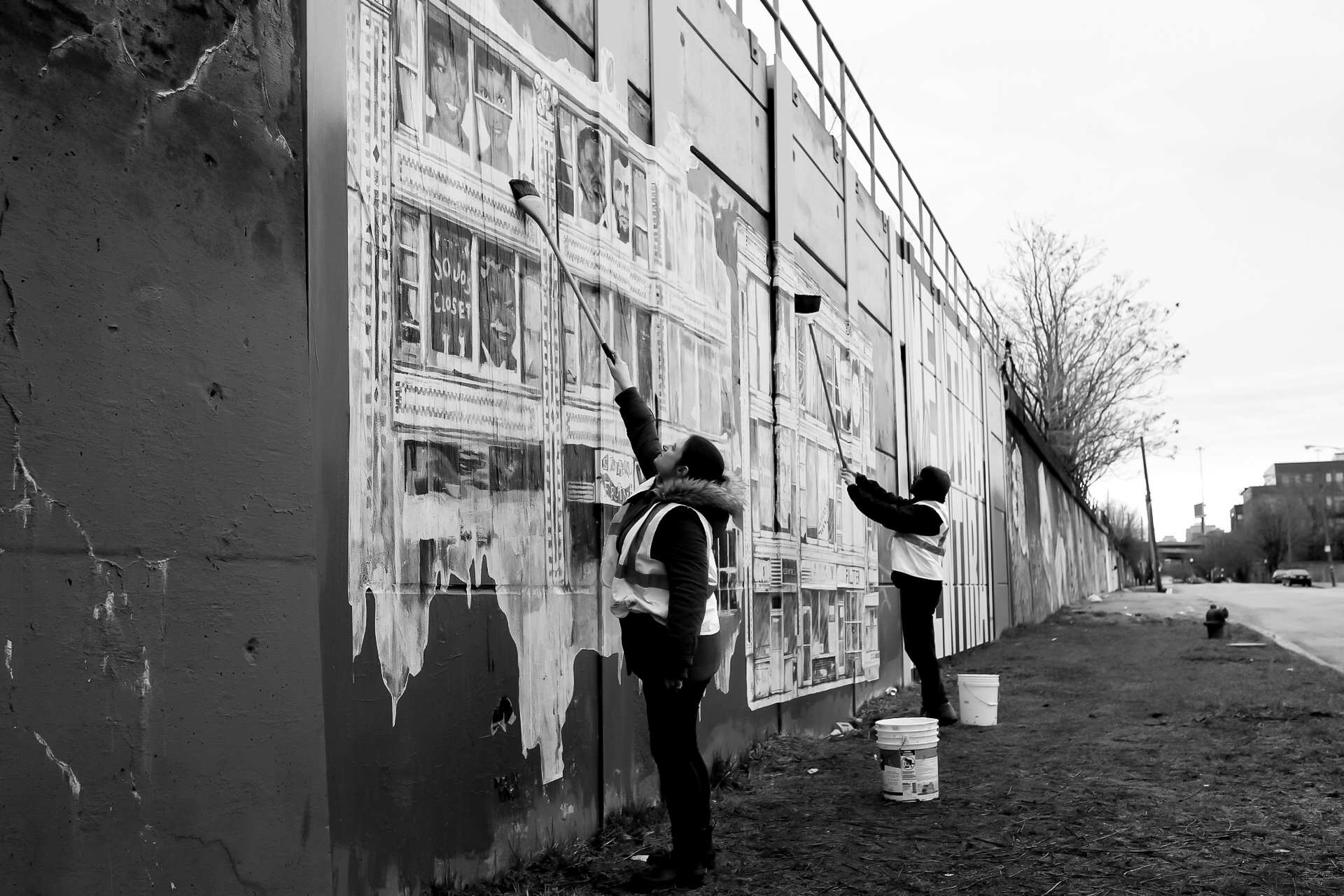 My introduction to art & street art was mostly through album artwork.
I was drawn to Futura 2000 (via UNKLE), Steve “Espo” Powers (Tommy Guerro), Paul Insect (DJ Shadow), and Bansky (Blur) before I even knew what street art was. Spray paint is banned in my home town of Chicago, so the internet became my portal to the world as I leaned about amazing artists creating on walls all around the globe.
My day job is in music, but I continue to have a strong passion and respect for artists of all mediums.

Works by Auguste Rodin offer an insight into his practice

SculptorCentral - November 28, 2019
0
The charismatic and obsessive French sculptor Auguste Rodin (1840–1917) remains a fascinating figure, his work, the subject of numerous controversies during his lifetime,...
Thanks for subscribing! Please check your email for further instructions.