Amid rising rents and declining foot traffic, various galleries, including P.P.O.W, Andrew Kreps Gallery, and James Cohan Gallery, have left New York’s Chelsea neighborhood for other districts, such as Tribeca and the Lower East Side. The latest to do so is Claire Oliver Gallery, which has plans to leave the neighborhood it has called home for nearly two decades for a new space in Harlem.

The 1,000-square-foot ground floor of Claire Oliver Gallery’s new home, located on Adam Clayton Powell Jr. Boulevard between 134th and 135th Streets, just a block away from the Schomburg Center for Research in Black Culture, will open its doors on January 18. In an interview with ARTnews, the dealer Claire Oliver said that she intends to reimagine and renovate the interiors of the other three floors of the building, which will is slated to be unveiled in 2021. 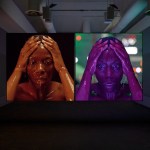 The new gallery will open with an exhibition of large-scale stained-glass works mounted on light boxes by Judith Schaechter, who has been represented by the gallery for 20 years and whose work will be the subject of a traveling retrospective making stops at the Memorial Art Gallery at the University of Rochester in New York, Toledo Museum of Art in Ohio, and Des Moines Art Center in Iowa this year. Schaechter’s exhibition will be followed by a presentation of work by Bisa Butler.

Oliver said that her decision to move the gallery to was partially motivated by the prohibitively high costs of maintaining a business in Chelsea.

“My passion in life, and the reason I got into the business to begin with, has been to discover those fabulous artists who are really thinking outside the box, and to promote them, nourish them, and be a big part of their career,” Oliver told ARTnews. “In Chelsea, that got tougher and tougher as the rent got bigger and bigger.”

According to the dealer, the gallery’s space in Harlem will “be more flexible and more community-oriented” than its previous situation in Chelsea. She’s planning to organize a variety of programming to take place at the gallery, including lectures from curators, after-school programs for students, collaborations with the nearby YMCA, and more.

“Now, I own my own destiny,” Oliver said of the gallery’s purchase of the brownstone in Harlem, adding that the neighborhood is a “famous sweet spot of culture.”

SculptorCentral - December 16, 2019
0
Thanks for subscribing! Please check your email for further instructions.