After weathering criticism for not following through on a 2017 commitment to return 26 objects, including thrones and statues, to Benin that were looted in the 19th century, France released a concrete timetable for action today.

The news could signal a major shift in how France deals with repatriation, which has been a major focus for its president, Emmanuel Macron. Its government had previously resisted such efforts, and today’s move could still be scuttled by existing legislation.

At a meeting in the Beninese city of Cotonou with that country’s president, Patrice Talon, the French cultural minister, Franck Riester, reaffirmed a promise to return artifacts from Benin that are currently held at the Musée du Quai Branly–Jacques Chirac in Paris, a controversial institution that is home to objects by indigenous peoples hailing from Africa, Oceania, Asia, and elsewhere. Riester said that the works would be returned “in the course of 2020, perhaps at the beginning of 2021.” 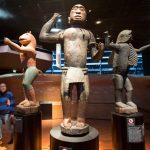 “With President Talon, beyond the terms of these restitutions, we discussed the enrichment of cultural cooperation between our 2 countries,” Riester tweeted. “The course is clear and our mobilization total.”

In 2017, Macron commissioned a report on the repatriation of cultural objects to Africa. Its release later in 2018 generated fervent debate in a country that has long had resisted acknowledging its history of colonialism (the Quai Branly’s director has accused the document of tainting the institution’s prestige), and it inspired cultural groups to begin vocally calling for the repatriation of African art objects.

The plan to return the artworks could afoul of French law. According to RFI, an African publication, codes governing the return of cultural objects need to be modified in order to allow France to send the 26 artifacts to Benin.

Today’s news comes after a series of reports and and meetings published and conducted over the past two years. Macron first promised to return the objects—which were plundered from Benin in 1892—in late 2017. (The exact artifacts that will be returned have not been specified, though scholars estimate that, in total, some 5,000 objects have been stolen from Benin.) The following year, he commissioned a report called “The Restitution of African Cultural Heritage. Toward a New Relational Ethics,” which was authored by Senegalese author and economist Felwine Sarr and French art historian Bénédicte Savoy. Though the report, which called for the return of various African objects, initiated discussion, it was, up until recently, seen to have had very few concrete effects. Sarr himself recently told the New York Times, “Things are not moving as fast as we would have liked.”

In the past, French officials have invoked obscure legislation to halt the return of African objects. When Talon first requested the return of Beninese artifacts in 2016, France said it could not let the objects go because of the Edict of Moulins, a 1566 law that makes it illegal for the state to part with objects that it inherits.

Since Macron’s promise to return the objects to Benin, France has only announced one other major form of repatriation—a vow to send back a Senegalese sword from the 19th century. It was returned this past November.

SculptorCentral - November 28, 2019
0
Art Industry News is a daily digest of the most consequential developments coming out of the art world and art market. Here’s what...

Notre Dame’s Roof Might Be Reconstructed With the Same Wood Used...

The Exploration of Legacy and Ideas | Marianne Nix | Art...

SculptorCentral - November 30, 2019
0
The Exploration of Legacy and Ideas | Marianne Nix Posted in In the Studio by Bethan Street on 23rd July 2019 Legacy and exchange of ideas feature...
Thanks for subscribing! Please check your email for further instructions.