Francesco Bonami, whose curatorial credits include the 2003 Venice Biennale and the 2010 Whitney Biennial, has returned for the second edition of his column, “Ask a Curator,” in which he addresses Maurizio Cattelan’s latest work, the intricacies of art fairs, and a great deal more. He can be found on Instagram at @thebonamist. If you have queries for him for a future column, please write to editorial@artnews.com. —The Editors

What can a curator learn from an art fair?
First you learn to feel irrelevant. Unless you bring some business you are just a footnote at the art fair. Second you learn not to corner any dealer with useless chitchat. Dealers are there to sell, and if you don’t buy, you will expose yourself to rudeness. People go to art fairs to meet people, then to look at art, but often people don’t want to meet you and sometimes they don’t want even to look at art. You also learn a different language where “very good” means good, “good” means ok, and ”ok” means “it’s a disaster, I have not sold anything.” 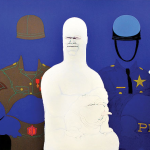 What should a curator wear to an art fair?
It depends how stupid you want to look. I suggest a Leo DiCaprio tweed cap and dark sunglasses.

If a curator walks around an art fair with a collector, does this give an appearance of a conflict of interest?
Collectors are often trustees of museums, so it’s mandatory for a director or museum curator to walk around with them. The only conflict is when as a museum curator you ask the galleries to give you a percentage cut if your collector/trustee buys a work. I know people who do that and it’s not fun. Dealers are desperate to sell something and they do not report it. They should. They should go to the collector and ask, “Hey, your curator asks for a percentage of the sale—is it OK for you?” If you are freelance and you just work on commissions you can go around with whoever you want, even Jeffrey Dahmer.

What did you think of the banana?
First remember you are talking with someone who in 1993 showed at Aperto 93 at the Venice Biennale Empty Shoe Box by Gabriel Orozco. So it’s hard to impress me with a banana on a wall in a booth of a fair. To set yourself on fire in the middle of a city square is harder than burning a pot of beans on the stove in your flat. But also we should remember than in 1968 the Italian artist Giovanni Anselmo presented Scultura che mangia, a bunch of salad squished between two pieces of granite by metal wire. Once the salad got rotten, the wire got loose, and one of the pieces of stone fell crashing to the ground. It was a much more dynamic piece than Cattelan’s banana.

Everybody, as usual when Cattelan does something, talked about it. A few idiots allegedly bought it. The point? The work doesn’t exist. The talking around it is the work. If I go to an art fair booth and stand there with no pants or underwear i assume people will talk, and write about me, and come back to see me. The question is, does it add anything to the conversation about art, culture, or society  nowadays? Cattelan is a genius, but the banana is like Leonardo da Vinci sharpening a pencil … totally irrelevant … folclore. Like a street artist doing giant soap bubbles. I am sure the street artist would be very happy to get $120,000 for one of his bubbles. Sometimes I wonder why collectors don’t do something provocative like that, instead of playing always the sidekick of the same artists. To compare the banana to Yves Klein’s Leap into the Void is idiotic and slightly offensive toward art history.

How can a curator with a modest salary get through a day at an art fair without having to pay for overpriced food?
Either bring a sandwich from home or stick with someone who will buy him or her lunch.

There’s a lot of talk about the best art of the decade going on right now. What were your favorite works or exhibitions from 2010 to 2019?
Huck and Jim (2015) by Charles Ray, rejected by the Whitney; Kara Walker’s “Sugar Sphinx,” Urs Fischer’s “Giambologna and Rudi” at the 2011 Venice Biennale, Cao Fei’s 2016 MoMA PS1 retrospective, Rudolf Stingel’s 2013 show at the Palazzo Grassi, Tino Sehgal at Documenta 13, Ragnar Kjartansson’s Bliss at Performa 2011, Susan Philipsz at the 2010 Turner Prize, Genesis Tramaine at the Richard Beaver Gallery in Brooklyn in 2019, Matthew Barney at UCCA Beijing in 2019, “Postwar 1945–1965” curated by Okwui Enwezor in 2017 at Haus der Kunst in Munich.

In which decade do you think the most important art was made?
I have a soft spot for the ‘90s, when I started, but I believe if you look carefully any decade has some amazing work. Maybe the issue is the speed at which great artists or works are consumed but maybe not … as any old fart, I indulge in some melancholia.

Who is your favorite historical curator?
Kasper König. He did not curate Documenta or the Venice Biennale, but he was and remains a true daring and tough visionary. I never met Jan Hoet, but I think he must have been fantastic. His 1992 Documenta was a game-changer for me. Kathy Halbreich, whom you cannot really call a curator, but it doesn’t matter, she has been a visionary, allowing many curators to express their visions, which is way more important than putting your stamp on an exhibition. Same can be said for Suzanne Pagé, who with a shoestring of a budget made the Musée d’Art Moderne du la Ville de Paris one of the most vibrant places in the ‘90s and in the early 2000.

Wildlife Artist of the Year 2019 Entries

SculptorCentral - October 27, 2019
0
I’m delighted to announce that once again all the artworks I submitted to the DSWF (David Shepherd Wildlife Foundation) Wildlife Artist of the...
Thanks for subscribing! Please check your email for further instructions.