Ever since the release of Studio MDHR’s acclaimed Cuphead in 2017, game studios and distributors have been trying to find novel ways of luring audiences with aesthetics that seem handmade. The look of Cuphead is based on cartoons from the golden age of animation, like Disney’s Steamboat Willie (1928) or the early films of Tex Avery. It’s a basic action game: a series of difficult boss battles alternating with short “run-and-gun” platforming levels. But Cuphead caught the attention of mainstream gamers early on for its distinctive appearance. Jared and Chad Moldenhauer, the game’s creators and art directors, reskinned familiar mechanics with an artisanal touch. Chad drew the characters’ movements on cels and painted the backgrounds by hand. MDHR successfully distinguished itself in a field littered with first-person shooters jockeying for the most photorealistic graphics and sophisticated physics engine, and sold more than five million units. 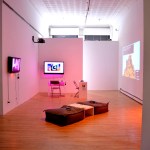 For all the accolades Cuphead received, the Moldenhauers’ distinct visual design didn’t propel the title beyond standard gameplay. And distinctive as it was, Cuphead was appropriating a familiar 1920s look instead of creating an original one. But other, smaller studios are digitizing handmade visuals for their games in ways that support equally innovative storylines and game mechanics.

The frame-by-frame animation techniques and hand-drawn scenery in Pale Room’s forthcoming Small Talk situates players at a party celebrating the end of days. The host, a humanoid figure with a gaggle of bird heads as a torso, tells you to keep the mood light, even as fish fall from the sky and meteors enter the atmosphere. Conversations with enigmatic yet charming characters open up an array of armchair wisdom and self-reflection. At a 2017 convention, art director Gabrielle Hoggett spoke about the origins of the game’s art in the animated GIFs she posted to her Tumblr, and how the dialogue comes from personal anecdotes about awkward encounters and episodes of self-doubt.

Instead of merely re-creating these moments verbatim, Hoggett embellishes them with fantastic characters and magical realist interludes depicting their memories. A character named Birdy tells you about missing a scarf lent to a former friend during a mountaineering trip. As you lament the broken bond, you’re transported to that day, walking through a small valley to the fateful cabin, reliving (and maybe repairing) that moment of regret. Dread is a young woman who clutches her face and shifts her downward gaze back and forth while her silhouette darts in and out of the frame. As you learn more about her, you realize that these are shadow versions of her, representing different layers of her personality, at times paralyzed by self-doubt, at others hopeful for oblivion.

Small Talk’s handmade illustrations in muted pastels and red-pencil linework do more than define a signature look. They set a playful tone for a narrative of personal discovery. “The characters have messy lives, feelings, aesthetics,” Hoggett wrote in an email interview. “Drawing them in 2D helps me convey the nervous and unsettling energy that is fitting for a game that takes place at the end of the world.” The imperfect alignment of animation frames creates a shaky look that brings life to an otherwise static scene. The partygoers in Small Talk look like they’re itching to chat. Even though talking to strangers at the party incrementally progresses the evening toward imminent doom, the sketchy, evocative gesture loops of each character entice you to keep chatting into the night.

Kara Stone’s Ritual of the Moon (2019) takes place in lunar exile following a “neo-Salem witch trial.” Each session of Ritual of the Moon lasts only a couple of minutes, and players must wait a full real-time day before they can play again. The game lasts a lunar cycle of twenty-eight days. With meditation, drawing sigils, and daily mantras as key elements of gameplay, Ritual of the Moon feels somewhat like a tarot reading.

This introspective practice is depicted with rugged, enticing collages, made by Stone in collaboration Rekha Ramachandran and Julia Gingrich. The characters, scenery, and objects are assembled from cut and scanned foils, fabrics, dried plants, wire, bits of computer hardware, and other materials. The game looks as if it takes place in a box assembled by Joseph Cornell, albeit one made in some far-off future. After completing a daily ritual, you see a comet hurtling toward your home planet, blazing with jagged cutout streaks. You can choose whether to use your sorcery to redirect its trajectory or to let fate take its course.

In an essay for Game Studies, an international journal of computer game research, Stone describes her work for “reparative game design” as “a method to work through difficult feelings, but it is also a means to stay in them as long as they need to be felt.” Drawing on academic discourses around affect, disability, and queer theory, Stone makes games that enact a process of healing. Stone’s handiwork accompanies the intentional act of playing out the ceremonial sequence of Ritual of the Moon. The sensitive detail of this work not only creates a moment of contemplation for the player, it serves as a restorative space for the artist as well. Processing a daily mantra and reflecting on choices are delicate work. This labor is deeply woven into the fabric of Stone’s process and results in a subtle patience rarely found in contemporary game design.

Deprioritizing the game industry’s demands for productivity in favor of purposeful self-discovery is what handmade game design is all about. Unlike Cuphead’s cursory and ahistorical grab at visual uniqueness, the design intentions of games like Ritual of the Moon and Small Talk question the relationship between physical craft and digital interactivity. For these designers, a well-crafted gesture is more than an eye-catching gimmick. It signals a heartfelt intention to depict tenderness and intimacy, joy and solace, contemplation and self-awareness. Indie games made with analog processes show that games can be more than entertainment or exercises in technical proficiency; they can be spaces for deliberate reflection, too.

Ethereal Underwater Photographs by Elinleticia Högabo Glimpse the Subjects Below the...

Shai Dahan latest mural in the Lower East Side, NYC

SculptorCentral - January 14, 2020
0
Our friend Shai Dahan recently wrapped up a 60 feet high up artwork on the streets of New York City in the USA. After...
Thanks for subscribing! Please check your email for further instructions.