The Belgian artist Henri Van Herwegen, who was better known by the moniker Panamarenko, has died at age 79 after battling a sudden illness, according to the Brussels Times, which first reported the news. Panamarenko’s work was influenced by the artist’s interest in airplanes and aeronautics, and his assemblages and mixed-media sculptures feature wings, propellers, and other appendages that would aid them in flight.

Panamarenko created his first “technological art object,” titled Das Flugzeug (The Aeroplane) in 1967, and, in 1968, Joseph Beuys invited the artist to exhibit the work at the Düsseldorf Kunstakademie. The artist’s pieces were not engineered for air travel—rather, they functioned as explorations of the achievements and limits of human ingenuity. Throughout his career, Panamarenko showed work at the Museo Reina Sofia in Madrid, the Museum of Modern Art in New York, the Koninklijk Museum voor Schone Kunsten in Brussels, the Hayward Gallery in London, and elsewhere. 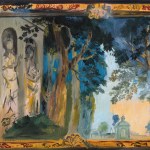 Born in Antwerp in 1940, Panamarenko attended the Royal Academy of Fine Arts in the Belgian city. He became the first living artist to have a retrospective at the Fine Arts Museum in Brussels in 2005, after which the artist announced his retirement. That same year, he gave an interview with the newspaper De Standaard in which he was asked about his sources of inspiration and process.

“You start off with an idea, and something gets added on along the way,” Panamarenko said. “Then, while you’re busy trying out things and changing everything, you suddenly find something that makes all that ironmongery into something beautiful.”

He went on, “Personally I have no idea where it comes from. It’s as if beauty falls out of the air; it’s all there of a sudden.”

On January 24, the Antwerp-based gallery Campo & Campo will stage an exhibition titled “Around the World in 80 Years” that will feature Panamarenko’s inventive models and drawings, as well as archival videos related to his practice. The show was intended to coincide with Panamarenko’s 80th birthday in 2020.

On the occasion of the artist’s death, Jan Jambon, Flemish minister-president and culture minister, told the Brussels Times, “Henri Van Herwegen was one of our most outstanding visual artists. A high flyer we will not forget in a hurry.”

best of the big screen

SculptorCentral - November 2, 2019
0
IT MUST BE HEAVEN (106 minutes) EThe first feature in a decade from Palestinian writer-director Elia Sulieman (Divine Intervention) sees him once again...

Museum Dedicated to Artist-Built Environments to Open in Wisconsin

Winter Is Coming? The Riddles on Ancient Viking Monument May Have...

Helen Mirren and her most unexpected career role

SculptorCentral - October 30, 2019
0
There is just a hint of power. But the power is there when she calls on it, as her latest role proves: Russia’s...
Thanks for subscribing! Please check your email for further instructions.