At the House Judiciary Committee’s hearing on impeachment yesterday, the Republican’s expert witness, law professor Jonathan Turley, testified that everyone in America is “mad.” “My Republican friends are mad,” he said. “My Democratic friends are mad. My wife is mad. My kids are mad. Even my dog seems mad, and Luna is a goldendoodle and they don’t get mad.”

And Professor Turley had presumably not even heard about Maurizio Cattelan’s new sculpture.

As you may know by now, the semi-retired artist, whose last major creation was a golden toilet titled America (2017), has now taped a banana to a wall of Perrotin gallery’s booth at Art Basel Miami Beach, the glitzy bazaar that alights in that flood-endangered city every December. It is titled Comedian, and it is priced at $120,000. Three were available, and the first two apparently sold on opening day. 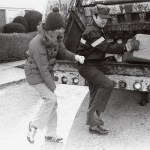 This has generated a fair amount of consternation and a mountain of headlines, as the artist and Perrotin no doubt anticipated. Just before the fair opened, as it happens, the gallery blasted out a press release noting that the banana is “Cattelan’s first time debuting new work for an art fair in over 15 years.” (Which is certainly a kind of milestone.) Fox News even did a story, naturally making it about Trump: “Artist behind anti-Trump gold toilet tapes banana to wall in expensive, wacky work.” (The Guggenheim owns the commode, and offered it to the White House when it turned down its request for a van Gogh loan. It was stolen while on view in England earlier this year, and remains missing.)

For many, Comedian is an object lesson in the excesses of the art world, the absurdity of the art market, and the gaping wealth inequalities that now define the global economy. That’s all true and fair. In fact, pretty much any criticism you lob at the banana sticks: it’s lazy, it’s cynical, and it’s not even very original (whatever that means). About 10 years ago, the Adriana Lara showed a banana peel on the ground as a sculpture, and Darren Bader has displayed fresh fruits and vegetables on pedestals. (The Whitney Museum is going to stage that work next month, with staffers regularly chopping the ingredients to make salads.)

The wise and sane thing to do would probably be to ignore this, but I will admit it: I love the banana, even as it fills me with dread.

What’s Cattelan up to with this work? In 1999, the artist taped the Italian art dealer Massimo De Carlo to the wall of his art gallery. Twenty years later, he’s reprised the work with a single banana, a loaded symbol if ever there was one. For collectors on the hunt for what used to be called—with a straight face—“wall power,” they can buy quite a potent image here. (Let’s not dwell on the castration undertone.)

It is an indelible sight, even if you only see it in reproduction. (Full disclosure: I am not in Miami, but I did hold a banana up to a wall in my kitchen this morning; it was a satisfying experience.) The piece may be a direct reference to the unforgettable (and somewhat annoying) bright-yellow bananas that Thomas Baumgärtel has spray-painted outside select art spaces in Berlin and elsewhere for years. Few things shock the eye like a banana showing up in an unexpected place.

The purported backstory behind the sculpture is also irresistibly, charmingly bizarre. “Every time he traveled,” Perrotin says in its email, Cattelan “brought a banana with him and hung it in his hotel room to find inspiration.”

As seemingly goofy as this all is, there’s an environmental undercurrent to the piece as well: many banana species have gone extinct over the past century (some of the most delicious, supposedly), and even the Cavendish cultivar that is omnipresent today is at risk because of a fungal disease. Being able to display a banana could one day be a sign of immense power and privilege. (Just as the ultra-wealthy now have private fire departments, perhaps they will soon have well-guarded orchards to produce rare varietals.)

Are there better uses for $120,000? Of course! At the New Art Dealers Alliance fair, which opens in Miami today, a collector could snap up quite a few works by emerging artists for that sum, supporting people at a stage when they really need it. There is also charity. But the rich love buying ridiculous things, and it seems preferable that, if they must, they exchange money for art, rather than a yacht or Facebook stock. (If you are sympathetic to a trickle-down arguments, one might note that Cattelan is a prodigious collector, so some of these funds may find their way to other artists.)

In an interview with ARTnews a few months ago, Cattelan said that, as an artist, “when you do avoid making things easy, and you do pay attention to nuances, then you happen to say something that people would prefer not to hear.” His banana would seem to be a very easy, very un-nuanced work. But it certainly does foreground facts that art types prefer not to think about, like the gargantuan prices paid for artworks that will in many cases quickly become forgotten and worthless. (Rotting away, as it were.)

Then there is the matter of the unequal playing field in the industry, where a tiny handful of artists and dealers mint fortunes while others line up teaching gigs, Uber shifts, and other second and third jobs to make ends meet. One might see Cattelan’s banana as a mordant caricature of such side hustles—a retired artist deciding to make a little extra cash in his spare time, in a way that only he can. Comedian is delivering a dark joke, and it is on all of us.

SculptorCentral - January 29, 2020
0
Tomás Saraceno just earned a spot in the Guinness Book of World Records—many times over. The Argentinian artist broke six world records when his...

How Marfa Went From Donald Judd’s Anti-Commercial Escape to a Mecca...