In the early hours of August 21, 1911, a handyman walked out of the Louvre with a bundle concealed under his white worker’s smock. He was in a hurry, having just stripped the Mona Lisa from its protective glass case and wooden frame. The man entered the nearby Quai d’Orsay train station and boarded the an express train out of Paris. More than a day passed before anyone noticed the blank wall space.

That dramatic chapter of art history will be adapted into a film helmed by Oscar-winning actress Jodie Foster. According to Deadline, Foster will base her movie on Seymour Reit’s 1981 book The Day They Stole the Mona Lisa, which recounts the brazen heist and ensuing media circus. 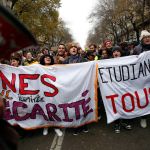 The thief, an Italian petty criminal named Vincenzo Perugia, entered the Louvre disguised as an employee and hid until the museum closed for the night. As the crime remained unsolved despite a team of 60 detectives assigned to the case, and the Louvre was forced to reopen without resolution, the shocking heist transformed into a national scandal.

Screenwriters for the upcoming film will have no shortage of colorful characters: modernist writer Franz Kafka was among the curious onlookers who came to gawk at the vacant wall. Police arrested French poet Guillaume Apollinaire on the base of a tip from his disgruntled secretary. He pointed the police toward Pablo Picasso, who was also interrogated for the theft (he was cleared of any suspicion but was forced to return some Iberian Bronze Age statues).

The thief, Perugia, escaped capture for over two years after the crime; by then, Mona Lisa had become a legend. In 1913, Perugia presented the painting for an appraisal to Alfredo Geri, an antique dealer, and Giovanni Poggi, director of the Uffizi Gallery in Florence, who authenticated the painting. Poggi convinced Perugia to leave Mona Lisa in his safekeeping, and contacted the police. Throughout his jail sentence, Perugia maintained that he was a patriot, returning Italy’s rightful property.

Meet the Others: Charlotte Sverdrup

SculptorCentral - January 23, 2020
0
A moon-like landscape: white, barren and out of this world. Colours of the Moon, a striking series by Charlotte Sverdrup depicts the largest...

Christian Bale puts his foot down in Ford v Ferrari

The Life and Work of the Inspiring American Sculptor

SculptorCentral - January 25, 2020
0
One to Watch ...
Thanks for subscribing! Please check your email for further instructions.