This year witnessed a bevy of momentous overlaps between art and popular culture. Major films, T.V. series, fashion designers, and musicians intersected with some of the most notable artists, museums, and other art world fixtures. Below is a (highly subjective) ranking of the top 10 crossovers from 2019, which placed the art industry and its players in new and exciting contexts.

What happens when you combine art world satire and horror? The answer was Velvet Buzzsaw, a film written and directed by Dan Gilroy and starring Jake Gyllenhaal, Zawe Ashton, Rene Russo, and Toni Collette. The movie’s sometimes lackluster, albeit entertaining, plot follows the wheelings and dealings of Morf Vandewalt, a dissatisfied art critic who becomes fascinated with artworks by a mysterious deceased artist named Vetril Dease. Much of Velvet Buzzsaw chronicles the gruesomely inventive ways that Dease’s paintings, sculptures, and installations murder dealers in Vandewalt’s circle, but those scenes are also punctuated by a few welcome jabs at the ways the art world functions. 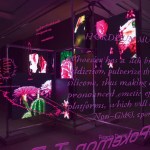 Big sleeves and outlandish patterns were the name of the game this fall when the Italian fashion house Moschino debuted an artful collection of pieces based on Pablo Picasso’s Cubist-era works. Pieces referenced some of the artist’s most iconic creations, from the masterpiece Les Demoiselles d’Avignon (1907) to his Guitar (1912–14) sculptures. The show at Milan Fashion Week included Bella Hadid dressed as a harlequin, while other models’ looks came with large, golden, and, in all likelihood, very cumbersome frames included.

When she was rescued from a slaughterhouse in 2016, Pigcasso couldn’t have predicted that she would soon become an art world sensation. But the porcine artist, who creates vibrant abstract paintings while holding a brush in her mouth, expanded her reach to the fashion industry this year with the launch of a line of limited-edition Swatch timepieces. Here’s to many more opportunities for the boundlessly charming Pigcasso in the years to come.

While details about their wedding in Newport, Rhode Island, have been kept under wraps, Cooke Maroney’s nuptials to Jennifer Lawrence brought to the fore some handy explainers about the “art boy,” an archetype around which the art and entertainment worlds have happily coalesced. GQ went as far to declare “art guys” as “the new style gods.” Wow. Thanks in part to Maroney and Lawrence, art boys everywhere, previously outshined by their exponentially more famous partners, were written into the cultural zeitgeist this year.

HBO’s critically acclaimed TV series Watchmen, which the show’s creator Damon Lindelof has called a “remix” of the original comic, featured two notable art easter eggs in its first season. In an early episode, Comanche Feats of Horsemanship (1834–35), a painting by George Catlin, appeared in the home of a police chief. Catlin is known today for his colonialist depictions of Native Americans, and—spoiler alert—its presence had possible implications for the character’s role in the history of racism portrayed in the show. Lindelof also revealed that a shiny blue sex toy figuring in another episode was based on Jeff Koons’s “Balloon Dog” sculptures. (He called it a “Jeff Koons limited dildo” in an interview.)

In late August, Lana Del Rey gave us her latest album, Norman Fucking Rockwell!, which includes hits like “Venice Bitch” and “Mariners Apartment Complex,” as well as new delights like the doleful “Cinnamon Girl.” Named for the famed 20th-century painter of mid-century American life, whose work Shufftleton’s Barbershop (1950) was at the center of a contested deaccessioning effort by the Berkshire Museum last year, her album received widespread praise. Pitchfork’s Jenn Pelly wrote that the artist’s use of Rockwell’s name in the title of her melancholic album upends the quaintness of the scenes it depicts, explaining that she “cuts through that outmoded fantasy with an emphatic fucking hyphen mark of irreverence, or enthusiasm, or both.”

After a visit to the Instituto de Cultura Puertorriqueña in San Juan, the Tony award–winning playwright, actor, singer, and producer Lin-Manuel Miranda, creator of the Broadway sensation Hamilton, got involved in a large-scale art digitization project in Puerto Rico. Together with Google Arts and Culture, Miranda organized an effort to bring artworks from four of the territory’s museums online. Once complete, the project will make thousands of works—including paintings, works on paper, engravings, and wood carvings—by Puerto Rican artists accessible for audiences around the world.

With a whopping 1 billion active monthly users, Instagram has become an essential platform for organizations and individuals to share their content and creations. But some of Instagram’s policies are at odds with content produced by artists today, including that of Betty Tompkins, whose account was temporarily deleted in April after she posted an image of her Fuck Painting #1 (1969). Artists have, for years, been protesting nudity restrictions on Instagram, and those efforts continued apace over the past 12 months. Photographer Spencer Tunick and the National Coalition Against Censorship staged a nude art action in New York in June, and, later in the year, a group of artists met with Instagram representatives in a closed-door roundtable. Along with artists like Clarity Haynes, Marilyn Minter, and Micol Hebron, Tompkins has been a vocal advocate for amending the social media platforms’ policy, which, in its current state is “discouraging for any artist whose work is challenging or thought provoking,” the artist wrote in a statement. Changing the operation of Instagram, one of the most important and powerful entities on the Internet, is no small endeavor, but artists are taking the behemoth to task. This fight against censorship was an important cultural moment of 2019.

SculptorCentral - November 23, 2019
0
KARLA GRANT PRESENTS: NOT JUST THE NUMBERS ★★★Monday 8.30pm, NITVMarking the International Day for the Elimination of Violence Against Women is this deeply...

SculptorCentral - January 30, 2020
0
Thanks for subscribing! Please check your email for further instructions.