Toshio Saeki, the illustrator, painter, and “Godfather of Japanese Erotica,” has died at the age of 74. His death was confirmed in an Instagram post by his Tokyo-based gallery Nanzuka. The cause of death was not stated. 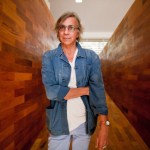 Saeki was born in 1945, in Japan’s Miyazaki prefecture. His childhood years were spent in Osaka, and he moved to Tokyo in 1969. He rarely spoke of his early years in interviews; when Saeki did open up, it was more often to describe his love of samurai-period drama or his illustrations, the subjects of which arrived in dreams and visions: Shinto spirits drifting among schoolgirls, lascivious corpses, the living and the supernatural mingling intimately.

In a 2017 interview with Artsy, he describes being drawn to Western comic artists, in particular the French illustrator Tomi Ungerer. Saeki published regularly in Japanese magazines, including the iconic Heibon Punch. In 1970 he self-published 50 drawings, titled Toshio SAEKI art book. The book was a critical success and later that year Saeki was given a solo show in Paris.

In 1972, his art appeared on the cover of John Lennon and Yoko Ono’s album Some Time in New York City. In the years to follow, he exhibited regularly at galleries in Japan and Paris but remained largely an artist’s artist as his work failed to attract serious consideration from major art institutions. But, Saeki said, operating in the underground allowed him the freedom to execute his boldest visions. By the late 2000s, he’d only traveled outside Japan once.

In the last years of his life, international audiences had finally taken notice. In December 2016, Jiu Xiang Ju Gallery in Taipei exhibited a selection of his illustrations. His work was presented at Art Basel in Hong Kong in 2017. And he’s one of 17 artists featured in “Tokyo Pop Underground,” a show currently on view at Jeffrey Ditch gallery in New York that explores the trajectory of Japanese contemporary art. Displayed in the gallery is Saeki’s colossal wall painting Ureshi Daruma (2018), which depicts dharma dolls mounted by young girls against a flat black sky.

“The visions that I show people are the incomprehensible stuff of ero[erotica] and mystery,” Saeki told Artsy. “If the reality hidden in my soul—even if it is only the smallest fragment of it—is able to evoke something in the viewer, then my intention has been achieved.”

Beck fears most of his music destroyed in 2008 fire

Minuscule Scenes Appear Against the Backdrop of Used Tea Bags in...

Artnet and Mark Cross Celebrated Women in the Art World at...

This Artist Is Commandeering a Civil War Statue in New York...

SculptorCentral - December 21, 2019
0
A monument to Admiral David Glasgow Farragut has been standing wordlessly in New York City’s Madison Square Park since 1881, but next month...
Thanks for subscribing! Please check your email for further instructions.