Every five years, MoMA PS1 in Queens, New York, attempts to take the temperature of art in New York, with organizers fanning out across the city to select artists for its Greater New York show. For the 2020 edition, which opens next fall, four curators with diverse interests and affiliations have been selected for that tall task, the museum said today.

Those curators are Ruba Katrib, who is MoMA PS1’s curator; the independent curator Serubiri Moses; Inés Katzenstein, curator of Latin American art at the Museum of Modern Art (PS1’s sister institution); and Fowle, who was tapped to lead the institution earlier this year.

The team has not yet released its artist list, but Fowle told the New York Times that the exhibition will focus on migration in the city and “New York as a network.” 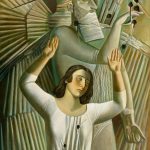 “So many people who call New York home also have a home elsewhere,” she told the Times. “You can have many homes at once.”

Fittingly, the curators have had seriously peripatetic careers. Moses was part of the curatorial team for the 2018 Berlin Biennale and a 2014 biennial in Kampala, Uganda. Katzenstein, who organized the current MoMA show “Sur Moderno,” ran the art department of the Universidad Torcuato Di Tella in Buenos Aires from 2008 to 2018. Katrib, who is behind the current “Theater of Operations” show at PS1, has curated in Santa Fe, North Miami, Chicago, and a panoply of other places; and Fowle came aboard the institution from the Garage Museum in Moscow.

The 2020 exhibition will include artists of different generations, and the curatorial team is “going to have to move fast, in terms of the studio visits that we do” to stay on schedule for next year, Fowle said.

When Fowle took the helm of the museum in June, she said in a statement that she hoped “to create a generative environment where our outlook is transformed through artists and their perspectives on the world.”

The first iteration of Greater New York debuted in 2000, and the exhibition features works created in the New York City area. It is now considered one of the most important biennial-style shows in New York, alongside the Whitney Biennial and the New Museum Triennial.

SculptorCentral - November 8, 2019
0
Inside are visas from the Ottoman Empire, the Khanate of Turkestan and the prefecture of Sin Kiang in the Celestial Empire of Cathay,...

A Quirky Collection of Cat Whiskers Diligently Cataloged in a Handbound...

SculptorCentral - December 26, 2019
0
The Hong Kong-born, US-based artist Jes Fan is familiar with the idea of being “in flux,” which he describes as a “stage of...
Thanks for subscribing! Please check your email for further instructions.