On Thursday, a nationwide strike in France brought the country to a standstill. Public transportation was largely not running as 180,000 demonstrators flooded the country’s streets, and some 6,000 police officers were deployed to Paris amid anticipation that events would take the same violent turn as last year’s Yellow Vest protests, which left nearly 2,000 civilians wounded and the Arc de Triomphe vandalized.

Because of the protests against resident president Emmanuel Macron’s plan to overhaul France’s pension system, a number of major museums across the nation were forced to alter their normal operations. Some had to readjust their hours in an attempt to accommodate mass walkouts by workers across France’s labor departments, and others had to close for the day entirely. 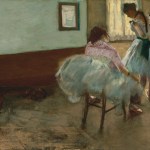 By the afternoon, labor unions across France had voted to extend the strike into Friday. The Musée d’Orsay in Paris announced on Twitter that it would close on Thursday; opening “is uncertain” for Friday. The Musée Nissim de Camondo, which displays 18th-century decorative arts and is housed in in the Hôtel Camondo, was also closed today.

The Palais de Tokyo and the Musée Guimet, which is dedicated to Asian arts, were also not open. There was hope, however, that the Palais de Tokyo would soon reopen, albeit with modified hours—on Twitter, the museum said that it would admit visitors on Friday, but it was planning to close several hours earlier than usual.

Other museums in the French capital have chosen to cut back their opening times or temporarily close permanent collections. The Louvre was open, though some galleries were closed to visitors. The Delacroix Museum closed early, and the Louvre’s monthly “nocturne,” or nighttime viewing period, was canceled. The Jeu de Paume is also closing early, and the Musée Rodin has said it will continue to be closed through Sunday.

Though permanent collection displays were closed to the public at many major French museums, special exhibitions at a number of institutions remained open. Perhaps the season’s biggest show, the Leonardo da Vinci exhibition at the Louvre, was accessible to visitors who bought advance tickets. Shows at the Centre Pompidou and the Musée des Arts Décoratifs closed early. The Hans Hartung show at the Musée d’Art Moderne de la Ville de Paris stayed open, as did the El Greco show at the Grand Palais, though a nearby Toulouse-Lautrec show was closed.

Tourism nationwide has already been affected. The Eiffel Tower closed Thursday while officials in Lyon and Strasbourg have reported widespread cancelations by tourists. Last winter, France’s tourism sector similarly took a hit from Yellow Vest riots. The Louvre, Jeu de Paume, Grand Palais, and the Musée des Arts Décoratifs were among the institutions forced closed in 2018.

The Maison Européenne de la Photographie, the Musée Maillol and the Musée Jacquemart-André in Paris have not announced any changes to operating hours this weekend. The Musée du Louvre-Lens, the Mamac in Nice, and the Mucem and MOCO Hôtel des Collections in Montpellier will also remain open to the public.

This article will be updated throughout the week.

Does Frozen 2 live up to the box office hype? Mostly

SculptorCentral - November 27, 2019
0
"The film is directed by the same team who did the original and once again, they have arrived at a judicious mixture of...

Five Australian writers reflect on their summers of joy

Oscars perplex as Nigerian film Lionheart disqualified over too much English