Each year, the Turner Prize, the most prominent art award in the United Kingdom, makes people angry. But the reason some were up in arms this year was entirely different—there was not one winner, but four.

At its award ceremony last night, the Turner Prize was given to all four of the shortlisted artists—Lawrence Abu Hamdan, Helen Cammock, Oscar Murillo, and Tai Shani—who had requested that they be considered for the prize as a collective. Their aim, they wrote in a letter submitted to the jury, was to call for “solidarity”—a plea that the issues they deal with in their work be given equal respect. “The politics we deal with differ greatly, and for us it would feel problematic if they were pitted against each other, with the implication that one was more important, significant or more worthy of attention than the others,” the artists wrote. 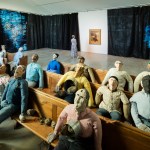 Seeing all four of the attendees take the stage together last night to accept the win was moving—even for this writer, who considers himself hardened against such instances of art-world pageantry. But, because this is 2019 and nothing nice can last very long, a number of hot takes soon followed in which people wondered whether the joint win marked some kind of end for the Turner Prize. If the Turner Prize, the U.K.’s most contentious art award, suddenly was devoid of competition, did it mean anything anymore?

Certainly, the point of art awards is that someone wins. The aspect that is less often considered is what that person wins—which is typically a sum of money. In the case of the Turner Prize, the winner receives £25,000 (about $32,500), and the shortlisted artists receive £5,000 ($6,500). This year, however, the winnings are being divided differently. The artists are splitting the £40,000 ($52,400) sum equally, such that each winner gets £10,000 ($13,100). That means that they’re sharing not only the prize but the money that comes with it. This is not just political solidarity, but economic solidarity.

In other words, the Turner Prize should be considered partly as a money issue, the artists imply, which makes the split purse more than just a lovey-dovey gesture. It’s an example of how artists can share resources in an increasingly competitive art world and a symbol of a larger tectonic shift taking place now in which emerging artists are finding a language to talk about—and make steps toward rectifying—significant disparities.

Theirs is admittedly a small sum. Murillo’s paintings can easily sell at auction for as much as 20 times his share of the prize, and Abu Hamdan has previously won the Nam June Paik Award, a prize for media artists that comes with a larger purse. It’s dangerous to assume what people’s finances are, but one might argue that those two don’t need the money. Fair enough. But Cammock and Shani aren’t represented by major galleries, and because they frequently work in performance and film, two mediums that are difficult to sell collectors on, there’s not a huge market for their art. A little bit goes a long way for early- and mid-career artists, however, and one can imagine that this small amount could make a difference for them.

[See a list of the art prizes with the biggest purses.]

As Jason Farago has pointed out in the New York Times, the decision to call it a four-way tie was presaged by a debate that took place in 2017 around the Preis der Nationalgalerie, a prestigious German art award sponsored by BMW and facilitated by the Nationalgalerie in Berlin. The nominees that year—Sol Calero, Iman Issa, Jumana Manna, and Agnieszka Polska—penned a joint statement in which they called out the prize for several reasons, one of which was that receiving the honor comes with no financial award. “Artists contribute greatly to the prestige of this prize,” they wrote, “and their labor, like all forms of labor, needs to be compensated proportionately.” They went on to write that people often assume that those up for consideration would be “remunerated by the market as a result of being nominated,” but that “this is not always the case.”

Given their track record, it seems likely that all four of this year’s Turner Prize nominees will have illustrious careers. Regardless, there will be obstacles ahead for them at some point. Splitting the prize’s purse will provide them a measure of security—and there is no telling what else it could inspire. “It could never have happened in my day,” Tracey Emin, a 1999 nominee for the Turner Prize, reportedly said of the collective win. Times are changing.

A Hoodie Is More Than a Fashion Statement. A Scholarly Exhibition...

Watch the Earth Rotate for 24 Hours in an Entrancing Timelapse...